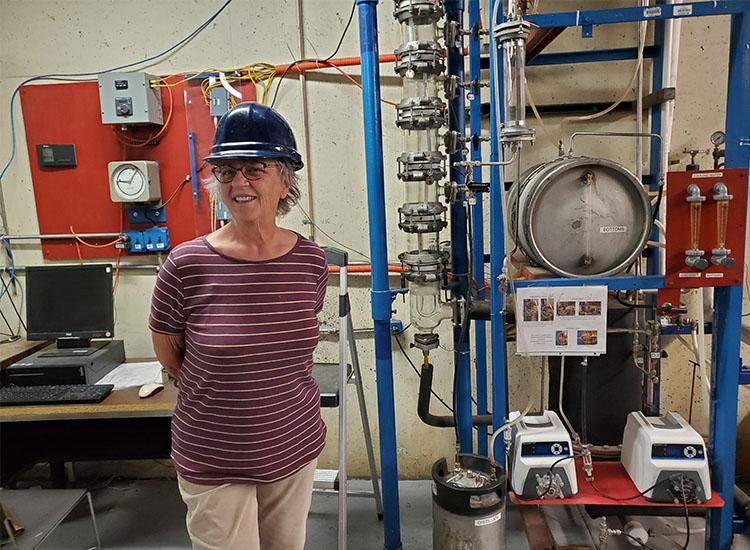 Linda (Headly) Repking visiting UA back in March, just before the pandemic hit. This picture was taken in front of the distillation column in Harshbarger!

Want to share your latest adventures? Submit your class notes to Holly Altman at haltman@email.arizona.edu – and be sure to include a photo!

After graduating with a BS in chemical engineering in 1975, I obtained my PE license and worked for various companies in the oil industry. Due to rampant discrimination against women – common at the time – I never achieved a "high" status.  After 17 years, I chose to stay home with my two children as they progressed through middle and high school. I returned to the field in 2006 working for Jacobs Engineering as a senior design engineer. I was pleasantly surprised at the number of women who had entered the profession in the years since my graduation. As my boss put it, "We discovered women have brains." In 2012, finances were such that I was able to quit working.

I live in in Southern California. Life is good. My husband passed away almost 10 years ago, but I enjoy visiting extended family, including two grandchildren with another arriving in December. I am an avid gardener, musician, bicyclist and traveler.

I just wanted to reach out and share some exciting news. I recently found out that I was selected to receive the 2020 National Science Foundation graduate research fellowship. I've been working in Washington, D.C. since I graduated and am going to be entering a doctorate program this upcoming fall. I was accepted to six doctorate programs and ultimately decided to pursue a PhD in systems engineering as part of the Department of Engineering Management and Systems Engineering at George Washington University. My research focus is emerging transportation technologies (AVs, EVs, e-bikes, rideshare, etc.) -- studying how we can better leverage these technologies to the benefit of, rather than detriment to society. I'm working with professor John Paul Helveston and am loving my experience so far!

I'm so grateful for the incredible undergraduate experience I had as part of the CHEE department and am excited to begin this next phase of my academic journey.

Hello CHEE Family!
I currently work in the wine, spirits and beer industry, with three years of experience as an assistant distiller with E.J. Gallo Winery. Since I only knew about spirits (how to make vodka, brandy and tequila), I did not know a whole lot about the production and winery side. So, I changed departments and now work as quality control technician with G3 Enterprises in the bottling services, bottling various wines while performing chemical analysis for these wines as a quality engineer. As someone that always wants to continuously grow, I took various certifications in wine, spirits and beer, and everything was pointing to Europe since that is where a lot of wine and spirits started. Vodka was made in either Poland or Russia, and whiskey in either Ireland or Scotland, as an example. Due to those signs, I applied to Heriott-Watt University for their master's program in brewing and distillation. Excited to start classes this fall semester online while working.

I wanted to thank Dr. Muscat and Dr. Sorooshian in making time to help with my graduate school applications. We have a great department and faculty and to all of you, I wish you the best in this fall semester. All your hard work will pay off, and you are going to provide a positive impact in this world, be it in the corporate world, research, or even as entrepreneurs. Bear Down and all the best.

I’d like to share that I was interviewed by AIChE recently, and I talk about my work as a tool installation engineer at Intel and what I love about it. My favorite class as an undergraduate was Process Control Theory! I received my MS and PhD in Chemical Engineering at California Institute of Technology.

I am a faculty member in the Department of Chemical Engineering at the University of Massachusetts at Amherst. This past year, I was awarded a 3M Non-Tenured Faculty Award and a National Science Foundation Faculty Early Career Development Program Award titled CAREER: Nature-Inspired Strategies for Protein Stabilization. I was also awarded tenure.

Here is a little bit about me since my graduation from UA in 2003.

Professional life: I have been the city engineer of the City of Sierra Vista for the last five years, overseeing engineering services and other public operations. I work with my staff to make the City of Sierra Vista a beautiful place to live. In Pima County, I managed the design and construction of regional wastewater treatment facilities for county residents. I founded Apex Applied Technology, Inc. (AATech), a successful professional consulting firm, and have acted as vice president since 2010. In the past 10 years, AATech has made differences in many socially disadvantaged communities in Arizona by promoting local food, safe drinking water and renewable energy. Over 50 programs were developed. Each program has a story behind it.

Personal life: I am happily married to a wonderful man, who is also an UA graduate. We have two awesome boys, Alex and Aiden. Now, Alex is a freshman at the UA.

We were married in school in 1988, and we’re still married. Mike is the director of R&D at Becton Dickinson in San Diego. Marta is retired. We live next to a seaside lagoon in Carlsbad, California. Two kids: Brandon is a mechanical engineer working for the US Navy. Daniela is a PreMed at Baylor. Our hobbies include mountain biking, wine tasting and finding the perfect hazy IPA.

After working 43 years in the oil and gas industry, I retired in 2018 to Tucson, the place where I grew up and attended high school and college. I worked for four oil companies during my career: ARCO, Mobil, Chevron and BP, starting as a process engineer then progressing to project engineer, project manager and ultimately asset development manager. My job took me on project assignments all over the world, both offshore and onshore. My last projects were in Prudhoe Bay, Alaska. I keep busy these days with new projects around the house and enjoy woodworking and gardening. I am married to my high school sweetheart (who also attended the UA). We are celebrating their 47th anniversary this year.

Next year will be the 50th anniversary from when I received my PhD from the UA. I also got an MS in 1968. I began at the UA in the fall of 1965 after receiving a BS in chemical engineering from University of California, Berkeley. John Heibel also started at the UA with me.

A colleague at UMass Lowell said that the only reason that I got into grad school at the UA was because Don White had a quota to take two hippies from Berkeley each year. When I got to the UA, Don offered me a half-time TA position and Bill Ahrens was my officemate. We had plywood partitioned offices in the downstairs of the unit ops lab next to the study room for the undergraduate students (now known as the Green Room).

I remember that Bill Ahrens, Bob Abbott, and Dan Pyzel introduced us to the local Mexican food and the bars. They told of one harrowing experience where they were hiding in the men's room after a fight had broken out in a bar and guys were going at each other with cue sticks from a pool table. I also remember the graduate students used to play a serious game called contract bridge at lunch many times in Dr. Rehm's office.

Dr. Don White's was my research advisor, and I worked on dynamic testing of the plasticating extruder. The machine was on the main floor of the unit ops lab. I had to collect my data using the DEC PDP 9 computer. I did that work late at night when other students were done with the computer and I could dynamically test the extruder and do data acquisition that was stored on the computer.

I married Jean Walker in 1970. Ken Simpson, also a PhD student, was my best man. I finished my PhD in July 1971 with a minor in physical metallurgy and was fortunate to have a job offer from the Lowell Technological Institute of Lowell, MA (now UMass Lowell). I was lucky since my other offer was a postdoc in Australia. UMass Lowell had started a plastics engineering program in 1954 and needed to get ABET accreditation for all its BS engineering programs. I was hired to start teaching graduate courses in plastics processing. Later, I also helped get a doctoral program for plastics engineering approved. I was the chair of the department for 18 years. I had a great career and spent 39 years as a professor before I retired in 2010.

My wife and I have three children: Richard, Raquel, and Jennifer who were 11, 7 and 3 years old when we took a cross country trip to go back to Tucson. We did miss Arizona and in 1981/82 I took a sabbatical with Don White to again work on the extruder. At that time Don White had received NSF funding to make biofuel from waste cellulosics and recycled scrap plastics. The extruder had been moved to the UA farm research area which was north of the campus next to the Rillito River. Don's research was timely since it occurred at a time when there was a severe oil crisis.  Unfortunately, the crisis passed, and the national politics did not lead to a sustainable program for the biofuel.

I have been a professor emeritus for ten years. Plastics engineering has become a major program in many parts of the world.  Over the years, I was invited to many countries, including China, India, Germany, Austria, the UK, Israel, Singapore, Japan, Taiwan, Spain and more. I must be one of the older alumni, but I can't catch up with Dr. Dick Edwards, who was Dr. White's first doctoral student. I still attend Zoom meetings as an Emeritus Professor of UMass Lowell.

I remember how I wandered the hallways of the College of Mines building and met Dr. Larry Gould, who was an emeritus professor at the UA.  He was a young geological engineer when he assisted Admiral Byrd with exploring the North Pole. I believe he said he was in charge of the sled dogs.

I had a wonderful career and look back with satisfaction that I made it through graduate school at the UA. I am forever grateful for the opportunity that I had to further my education and my career.