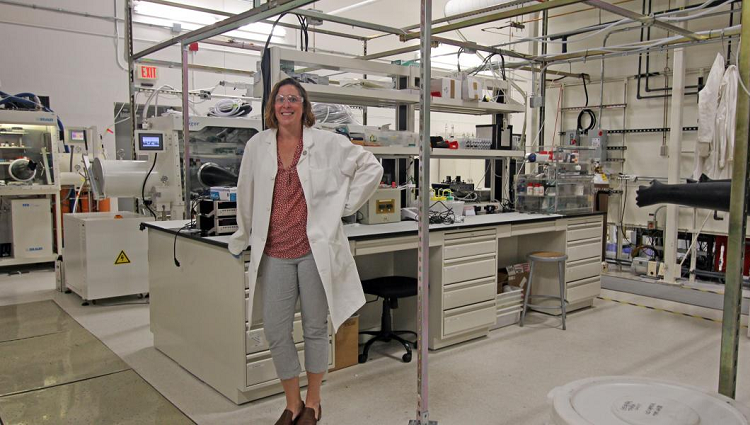 CHEE associate professor Erin Ratcliff is leading one of the Department of Energy's Energy Frontier Research Centers, to advance energy conversion and storage technologies using soft organic polymer electronic materials. Funded at $10.95 million over four years, the University of Arizona-based Center for Soft PhotoElectroChemical Systems, or SPECS, will focus on the molecular-level science behind low-cost, highly scalable soft semiconductor technologies. These semiconductors will absorb light, create electricity and use the electricity to drive electrochemical reactions and create chemicals called solar fuels – a sustainable alternative to fossil fuels and batteries. A prime example is hydrogen produced from sunlight.

Most current energy storage and solar fuel formation technologies are made of hard, inorganic materials. But these materials are increasingly costly and difficult to acquire. They are also difficult to scale, especially to the levels needed to achieve a carbon-free energy economy by 2050. At the molecular level, converting solar energy to electrical energy, and sometimes storing that energy for later use, involves a series of redox reactions, or electron exchanges between molecules.

"By creating alternatives to in-demand semiconductor technologies, Dr. Ratcliff and her hand-picked team of experts is playing a critical role in moving our nation toward a more sustainable future," said UA President Robert C. Robbins. "This is outstanding news for our university, and we are proud to have Dr. Ratcliff leading the effort and providing an incredible example and point of inspiration for young women in STEM."

SPECS will focus on using organic polymers – long chains of molecules that interact with one another at many points. Unlike traditional, inorganic devices, which are formed by attaching individual atoms, their multitude of interacting points increases reliability by providing more potential pathways for a chemical reaction to follow. Ratcliff said one analogy compares a network of polymers to a bowl of spaghetti, in which the strands overlap at many points. Even if the spaghetti shifts and one possible communication path is no longer an option, many other paths are still available.

"If you have a molecule and you break one bond, that molecule is now a completely different molecule, with new properties, new colors, new energy levels, new electrochemistry," Ratcliff said. "But with polymers, you can break one bond and it can be possible to still do everything you need it to do."