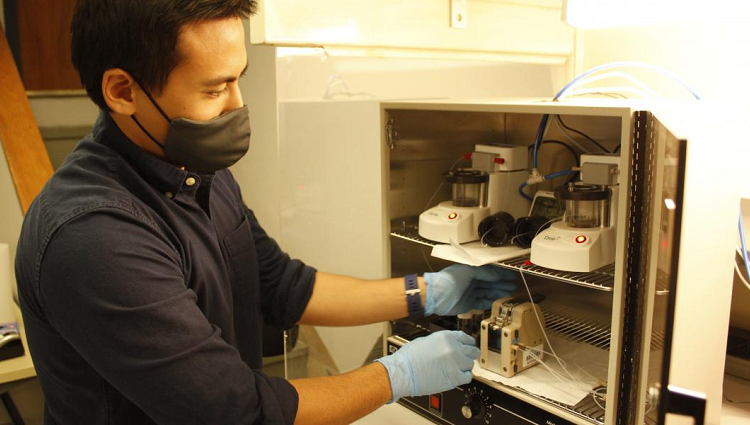 Using a three-year, $360,000 Young Investigator award from the Army Research Office, CHEE assistant professor Suchol Savagatrup is developing a water test that uses oil droplets, rather than a solid sensor, to immediately detect contaminants. The test will be quicker and more portable than previous methods, and can be used to identify environmental contaminants like lead and per-and polyfluoroalkyl substances to maintain public health.

“Lab testing requires time and dedicated equipment, and what we’re developing could be really useful for someone who wants an actionable item right away, rather than having to wait for samples to be transported back to the lab,” Savagatrup said. “There’s a lot of benefit to a device that could be used directly in the field.”

Current portable sensors on solid devices are dipped in the liquid being tested. If the contaminant in question is present, it binds to or interacts with the sensor. However, this method is prone to various forms of instability, such as degradation of binding sites, often leading to unreliable readings. Savagatrup’s solution is liquid sensors, in the form of reconfigurable oil droplets that change color when they come in contact with contaminants.

“These oil droplets are fully submerged in water,” said Savagatrup. “So, the boundary between each droplet and water is its own interface and provide an independent reading. If you have multiple of these droplets, you end up with a network of connected information, like neurons in the brain, or pixels on a computer screen.”