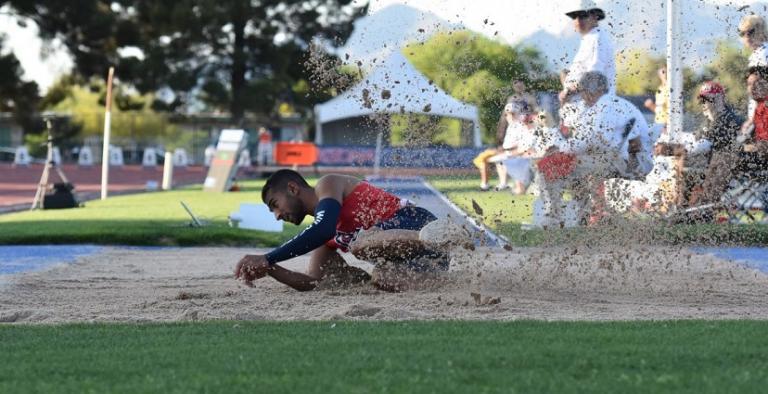 Mo Almarhoun was a nationally ranked athlete in Saudi Arabia, and came to the United States to fulfill his dream of being a student-athlete.

Almarhoun comes from a family of athletes, and he began trying out sports – including swimming, soccer and tennis – when he was 5 years old. He tried every sport at his town's sports club, eventually focusing on track. Almarhoun spent his high school years competing with the Saudi national team in seven different countries. He was the national champion in his age group in both long jump and decathlon from 2012 to 2015. In 2015, he placed fifth in the world in the high school championship in Wuhan, China.

“I love the feeling of accomplishment when I race,” he said. “What I like about track is there is no limit. You always try to push because there is always room to improve.”

He also takes this passion into the classroom, where he's received an honorable mention on his transcript almost every semester he’s been at UArizona, for maintaining a GPA of 3.5 or above.

Almarhoun originally attended the University of California, Los Angeles for a year before falling in love with the University of Arizona campus when he visited Tucson for a track meet. He transferred to UArizona in 2016 and soon bonded with his track teammates and fellow engineering students. He’s particularly close with classmates from collaborative learning courses, designed to help students solve problems together.

“We try and foster a community,” said University Distinguished Professor Paul Blowers, one of Almarhoun’s instructors and a leader of campus collaborative learning efforts. “It’s kind of like, in addition to having an athletic team, he has an ‘engineering team.’”

Though he’s already come a long way from his hometown, Almarhoun has his sights set ever higher. His goal for this season is to reach 25 feet in the long jump. He also hopes to qualify for the Olympics one day.

“If I didn’t have the support from the community here in Arizona – the student-athletes, my classmates, coaches, my professors – and my coach and family back home, making it this far would have been impossible,” he said. “I am fully blessed I got the chance to be a student-athlete at the University of Arizona.”