Three Flinn Scholars Choose CHEE and Look Toward Giving Back 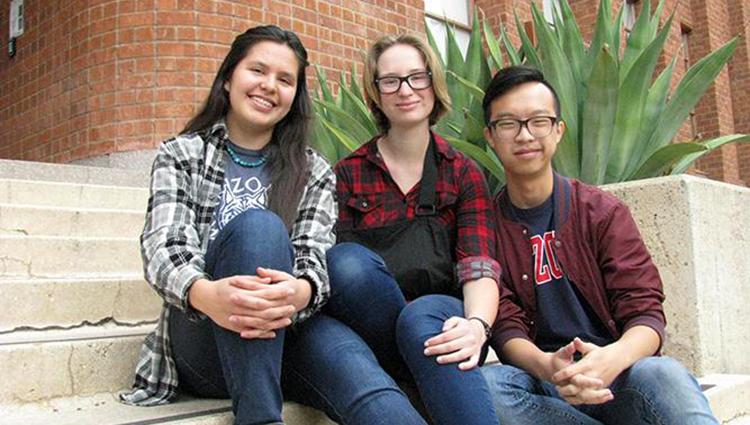 Five Arizona Flinn scholars joined the College of Engineering in 2017. Three are CHEE students looking to use their education to give back – to the Navajo Nation, disenfranchised populations and, indeed, the world.

An introductory class with professor Armin Sorooshian convinced Amanda Bertsch that chemical engineering was a good way to combine her interests.

“Chemical engineering is cool because chemistry is so fundamental,” said Bertsch, a double major in chemical engineering and computer science from Prescott. “It underlies everything, every problem, because it’s what the world is built from.”

These days Bertsch is working in the Maier Environmental Microbiology Research Group on mine wastewater filtration, volunteering with Girls Who Code to help close the STEM gender gap, and building wacky contraptions in the Rube Goldberg student club.

“I’m interested in breaking down barriers – whether through building a better translation service to reach non-English-speaking communities or making clean air and water more accessible to poor populations,” she said.

Nizhonabah Davis got a jump on college in the New Start program, where a chance encounter with Jeff Goldberg, then dean of the College of Engineering, sparked a change in plans.

“A doctor can help a few thousand people in a lifetime,” he told Davis, who intended to study physics before going to medical school. “An engineer can help millions with one project.”

The UA Honors College ambassador draws inspiration from her rural community in Ganado on the Navajo Nation, which for decades has lived with the consequences of uranium mining. Davis volunteers in professor Bob Arnold’s lab developing ways to remove uranium from water sources.

"I hope to use my education to give back to my community," she said. "They’ve helped me in so many ways."

Nevertheless, Wong has championed sustainability since he first learned about recycling at 6 years old.

As co-chair of the UA Students for Sustainability Energy and Climate Committee, Wong is now helping install solar panels with gardens underneath to reduce fossil fuel usage on campus and provide testing grounds for agrivoltaics. Among Wong’s future plans is the accelerated master’s program in environmental engineering.

"My dream is to help make the world a cleaner and greener space so that future generations can survive on this planet," he said.

Each year the Flinn Foundation provides about 20 of Arizona’s highest achieving high school seniors with full scholarships, including at least two opportunities to study abroad, for four years of undergraduate study at one of Arizona’s three public universities.

"CHEE is proud to have a rigorous and supportive academic culture that attracts some of the most academically talented students at the UA," said Anthony Muscat, professor and department chair. "Nizhonabah, Amanda and Stanley bring intellectual distinction to our department."